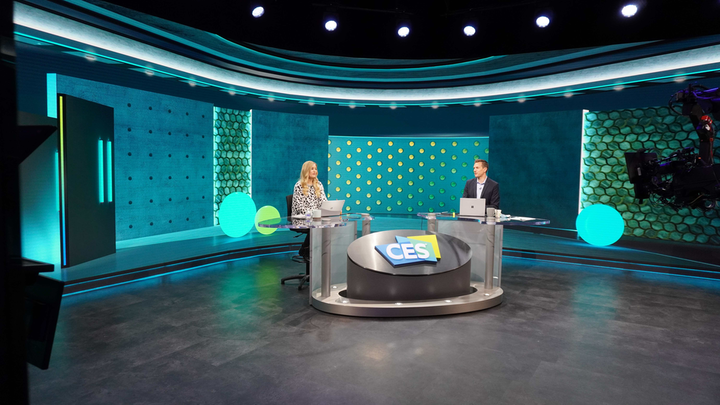 Typically, at the start of a new year, CES takes over the Las Vegas Convention Center, with exhibitors unveiling the latest tech gadgets and innovations. But in 2021, the 54-year-old trade show, which is owned and produced by the Consumer Technology Association (CTA), turned into a tech marvel of its own.

The all-digital CES 2021, which took place from Jan. 11-14, still featured product launches from startups and industry giants, but the bells and whistles were confined to attendees’ desktops. Gone were the grand brand activations and bright lights of the Strip. (The annual show typically attracts about 170,000 attendees, and last year it spanned 2.9 million square feet of exhibit space.)

Instead, for this year’s event, CTA partnered with Microsoft to build a virtual venue where at-home attendees viewed presentations, listened to keynotes, watched live entertainment including a performance by Billie Eilish and explored more than 100 hours of conference programming with sessions on topics such as privacy, the future of AI and health care, autonomous transportation, retail and tech policy. 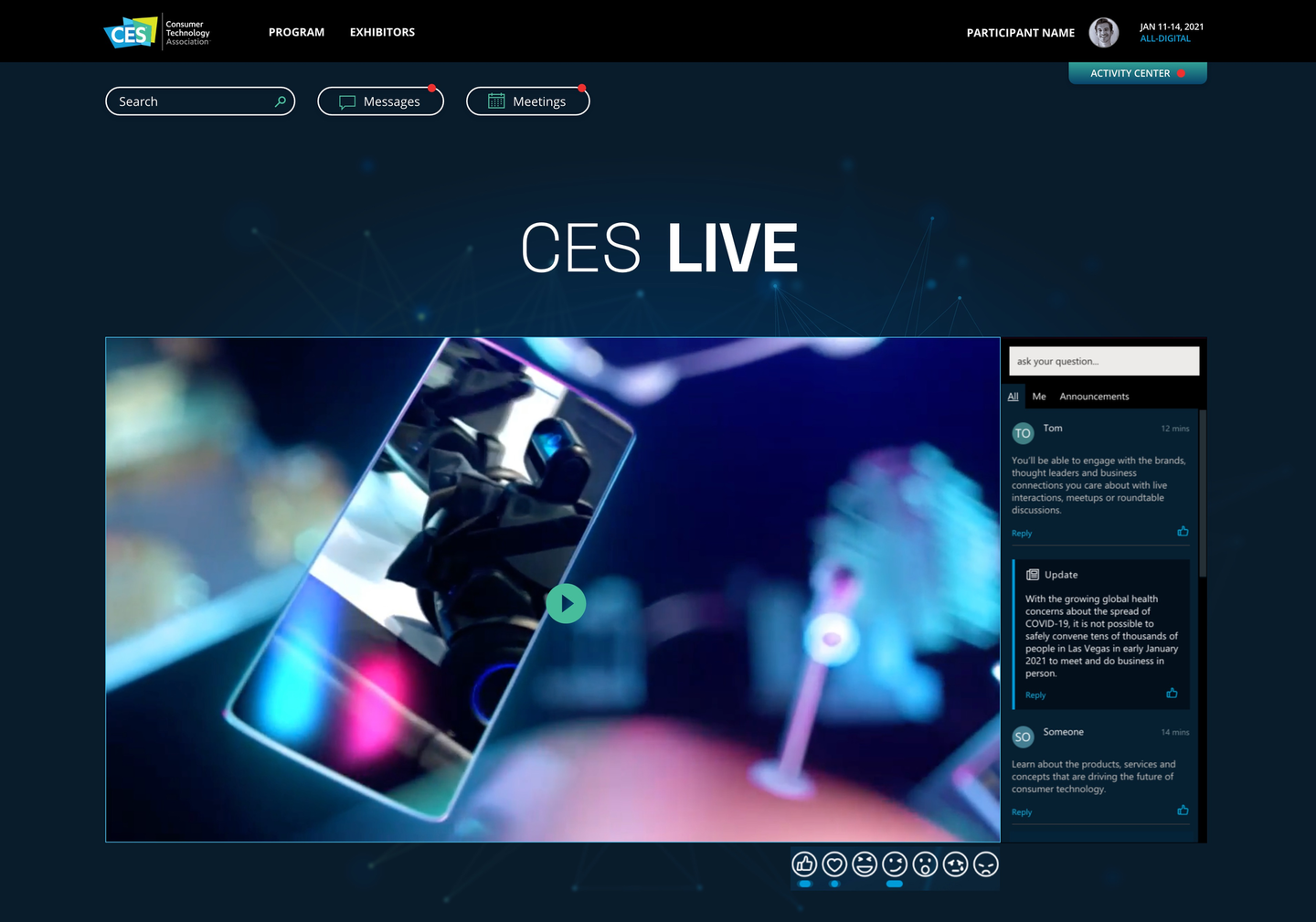 “We knew we couldn't just take the physical event and move it online. We had to completely recreate it and keep in mind people’s limited attention spans and make sure that we solve for that connection aspect that's such an important part of being in Las Vegas for CES,” said Sarah Brown, director of events communications for CTA and CES.

Of course, the current pandemic and the world’s increased reliance on tech to stay entertained, connected and healthy during this time served as an overarching theme across programming and product launches, with a particular focus on streaming services, 5G connectivity and health devices such as smart masks, disinfecting robots and air filtration systems.

Plus, one of the panel discussions, “Getting Back Together Safely” with Jim Digby, president and co-founder of the Event Safety Alliance; Jim Mault, CEO of BioIntelliSense; and Caryn Seidman-Becker, CEO of Clear, explored how live events can leverage technology to get back to business safely and how health data collection relates to guest privacy.

Central to the event’s microsite design was the “Live Anchor Desk,” which offered the look and feel of a news broadcast, presenting the latest news and highlights from the trade show, along with interviews with visionaries like Mark Cuban and will.i.am and leaders from companies such as AT&T, Audi, Bosch and Samsung Electronics. A scrolling chyron displaying related tweets added to the newsy vibe. The set, which followed COVID-19 protocols, was being broadcast live from the Microsoft Studios in Redmond, Wash.

In lieu of in-person demos, exhibitors gave live online presentations, called Spotlight Sessions, where they showcased their products and services. Trading in exhibit floor space for bandwidth also meant lower costs. For example, in 2019, exhibitors paid $4,500 for a space measuring 10 feet by 10 feet. This year, companies could participate in the digital event for as little as $1,200. Brown also noted that a digital event produces more valuable data than an IRL event, which can be shared with the exhibitors, “so they'll be able to track their ROI in a different way this year.”

Another upside to the all-digital event is that organizers were able to broaden the audience and expand its reach. “So many people that are participating this year may never have attended CES in the past,” Brown said. “Typically, we had about 30 percent of our audience coming from outside the U.S. We expect that that may be higher this year. And the real goal of that is to encourage some of these folks to make the trip to Las Vegas next year and experience the event in person.”

Rather than spontaneous in-person run-ins, at-home attendees were able to browse an attendee directory and send messages through the platform or set up a meeting, which could include up to 29 people. (Attendees were required to agree to the networking component in order to be contacted.) “You could still make those business connections and have that serendipitous type of interaction that CES has become so well known for,” Brown explained.

“With that being said, we can't wait to get back to Las Vegas for 2022,” she added. “What we're really going to do is take all of the best learnings from the all-digital CES and have a physical event next year, if we're able to safely do so, but still incorporate so much of the best of the all-digital version.” 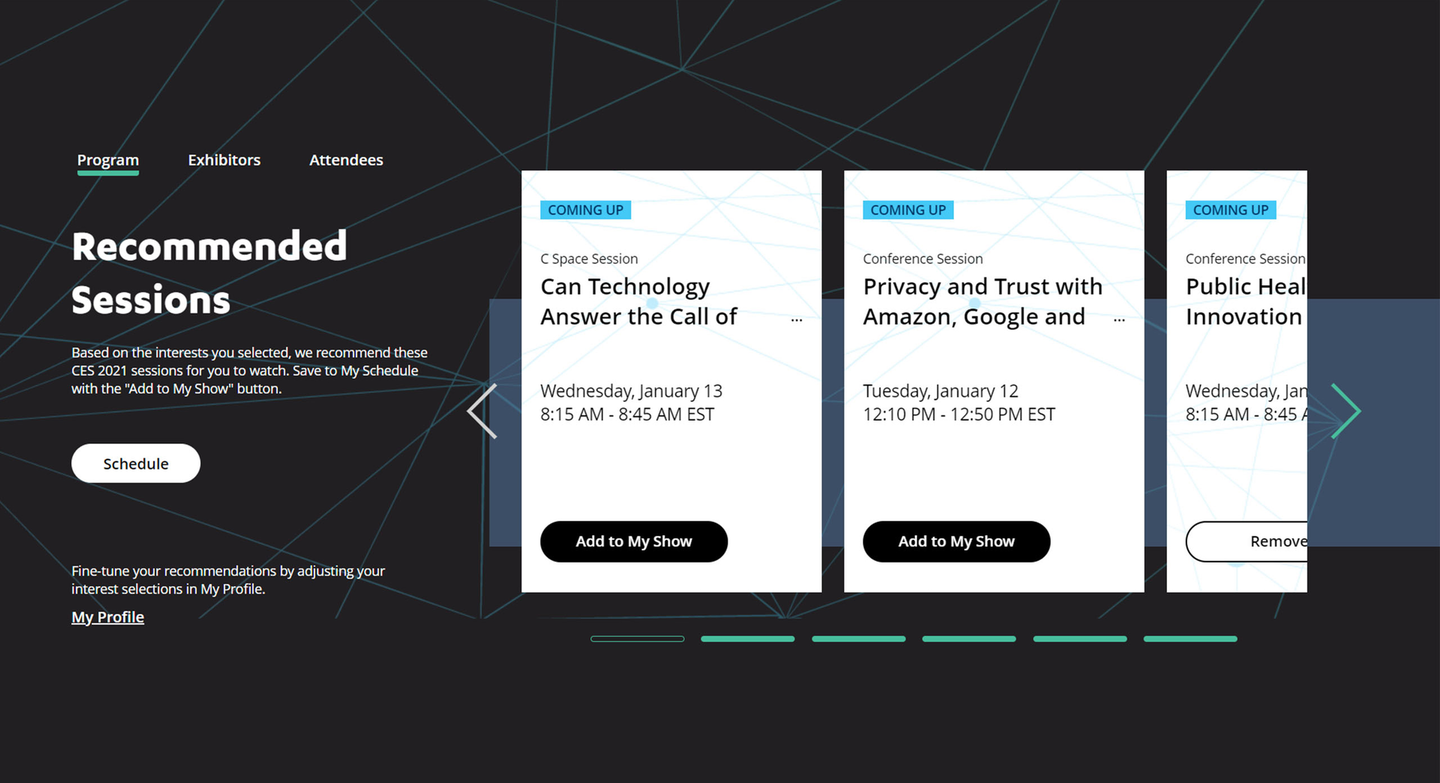