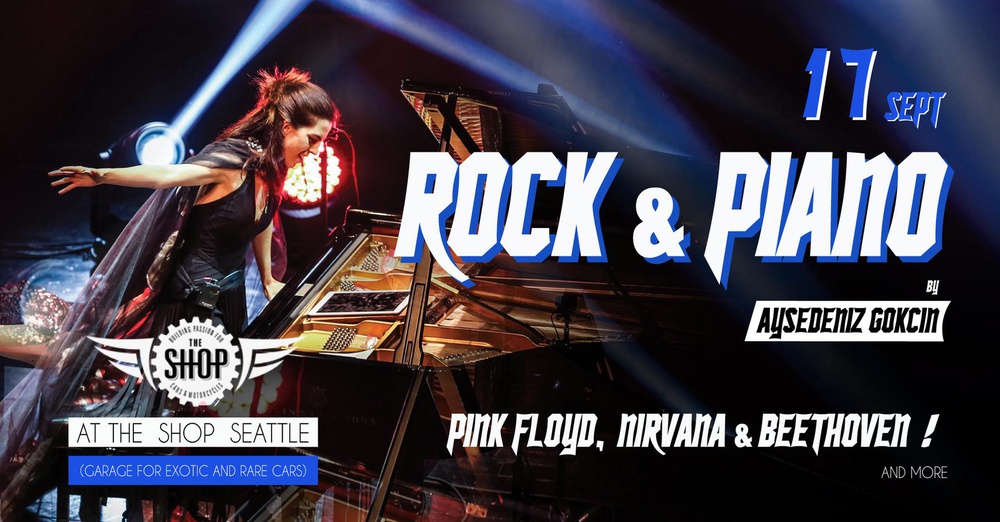 Get ready for a night of virtuoso piano arrangements of Pink Floyd and Nirvana performed by classical crossover pianist and composer AyşeDeniz Gokcin.

Over the years, there have been (at the very least) thousands of cover versions of Pink Floyd songs. A new approach to three of the band's tracks has captured the imagination of the classical world. A young Turkish pianist, graduate of the Eastman School of Music and the Royal Academy of Music in London, AyşeDeniz Gökçin has interpreted Floyd's music in a "Lisztian" way.

In Seattle, AyşeDeniz will perform Pink Floyd and Nirvana arrangements and her original compositions in the industrial atmosphere of a private country club for gearheads filled with exotic and rare automobiles. In the eclectic setting, the listeners will immerse themselves in the wild raw energy of rock’n’roll and muse at the artist’s creativeness as she weaves familiar tunes into a magnificent and cinematic fabric.

AyşeDeniz (pronounced Eye-Shae Den-ees) is a celebrated pianist, composer and arranger known for her inventive synthesis of classical and rock music. Recognized internationally, she now performs for fans worldwide to sold-out shows. She has appeared on BBC News, Classic FM, Prog Rock Magazine, Vogue and more.

In 2014, AyşeDeniz won the Argentinian Association of Cable Television Music Award. In 2015 her new album Nirvana Project dedicated to Kurt Cobain reached the UK Top 10 Classical Charts on iTunes. In 2016, she was named the ‘Pianist of the Year’ in Turkey, and in 2017, she made her debut at New York City’s iconic venue ‘Le Poisson Rouge’.

“We love what this pianist is doing for the world of classical music. As she says herself in her Instagram bio, she is “uniting classical and non-classical audiences.” And she is doing so startlingly well.” – Classic FM

“Once again AyseDeniz fuses classic rock with classical via a dramatic and gripping performance" – Rafe Offer, Co-Founder of Sofar Sounds

2 people in Seattle have booked these tickets within the last day.