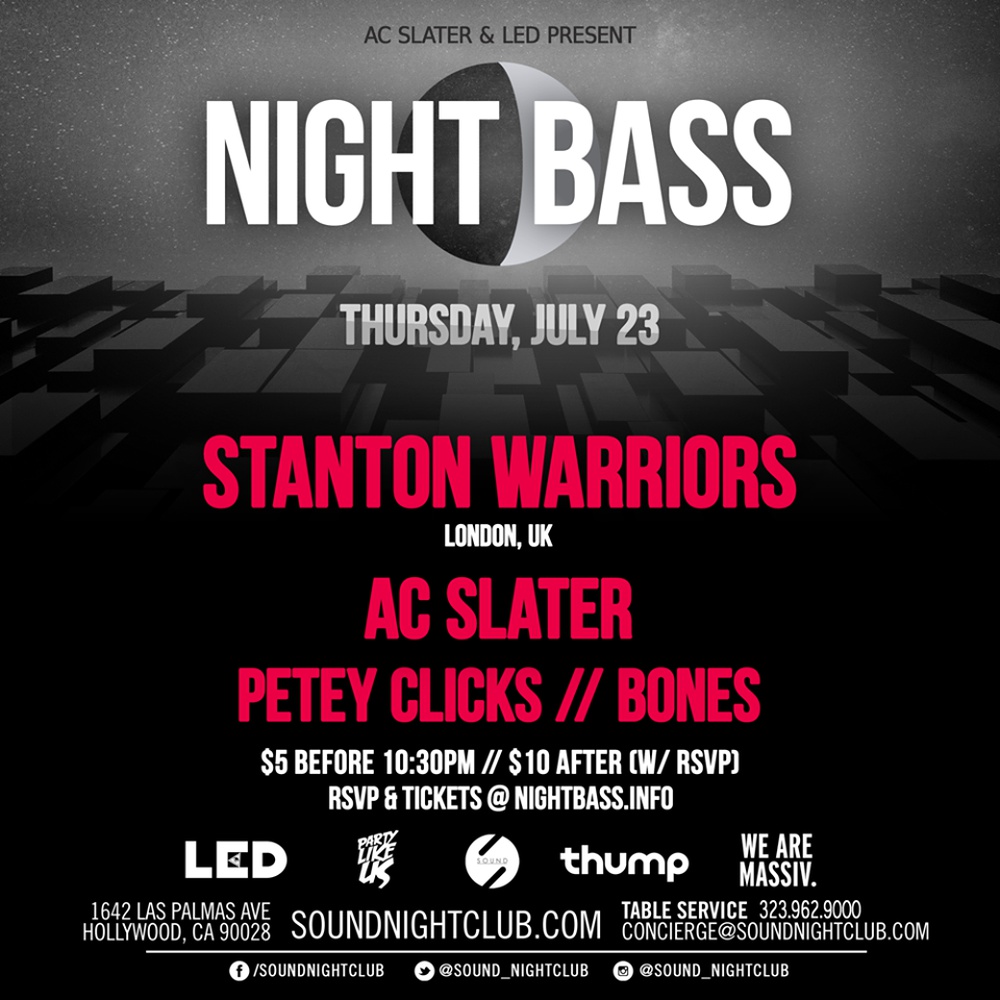 Since bursting onto the scene with their multi award-winning compilation “The Stanton Sessions” back in 2001, the Stanton Warriors’ irresistible and inimitable sound has consistently remained the soundtrack to some of the world’s biggest and best parties over the past thirteen years; from East London warehouses, Miami boat parties and illegal Detroit raves, to the stages of Coachella, Glastonbury, Burning Man and Ultra, selling out global tours and topping DJ lists along the way.

In the studio, Bristol’s Mark Yardley and Dominic Butler have honed a trademark, uncategorisable sound that is at once all their own, but also utterly indefinable, leading to high-profile releases on XL Records, Fabric, Cheap Thrills, Central Station and Universal, alongside official remixes for everyone from Daft Punk and Fatboy Slim, to MIA and Gorillaz. This phenomenal output and remarkable longevity has ensured the Stanton Warriors legendary status amongst not only their fans, but also their peers, as they remain fresh, original and relevant; obstinately dancing to beat of their own drum and helping to pave the way for new talent.

In 2014 alone, the Stanton Warriors topped the Beatport charts (again), inspired Disclosure’s Grammy-nominated album Settle, got Annie Mac dancing on her living room carpet, opened London’s 3k capacity Building Six club, saw their podcast shoot to No. 3 in the iTunes chart and smashed the stages of Ultra, Supersonic and Glastonbury.

In 2015, Stanton Warriors typically show no sign of slowing down with a brand new album featuring a host of new exciting bass artists such as Cause & Affect (aka Chris Lorenzo & Kane), sold-out tours across the USA, Europe, Australia and the Far East, collaborations on Claude Von Stroke’s Dirtybird label and a slew of exciting releases on their own tastemaker label Punks.

OUR PHILOSOPHY Sound was built with a simple philosophy: to bring a novel and always-evolving experience to nightlife in Hollywood. We worked with a “Dream Team” of designers, professionals, and industry specialists to create an environment based in cutting-edge visual and audio technology, musical formats, and interior design. Our interior 3D mapping and custom video content, paired with our one-of-a-kind sound system, offer an unparalleled nightclub journey. Sound is a strong supporter of the arts, and pride ourselves on our artist program, which features a new local artist every few months. These talented artists create huge panels of art to be showcased on the exterior of Sound, as well as a number of pieces that will be hung inside the venue to be viewed gallery-style during the daytime (in addition to at night). Our culinary offerings parallel our artist rotation schedule, changing quarterly and offering pairings to reflect seasonal sentiments. Our menu is a collaboration with regional chefs, who are constantly coming up with delectable adaptations of classic new American foods.
Order Details
Total Amount
$0
0 Tickets