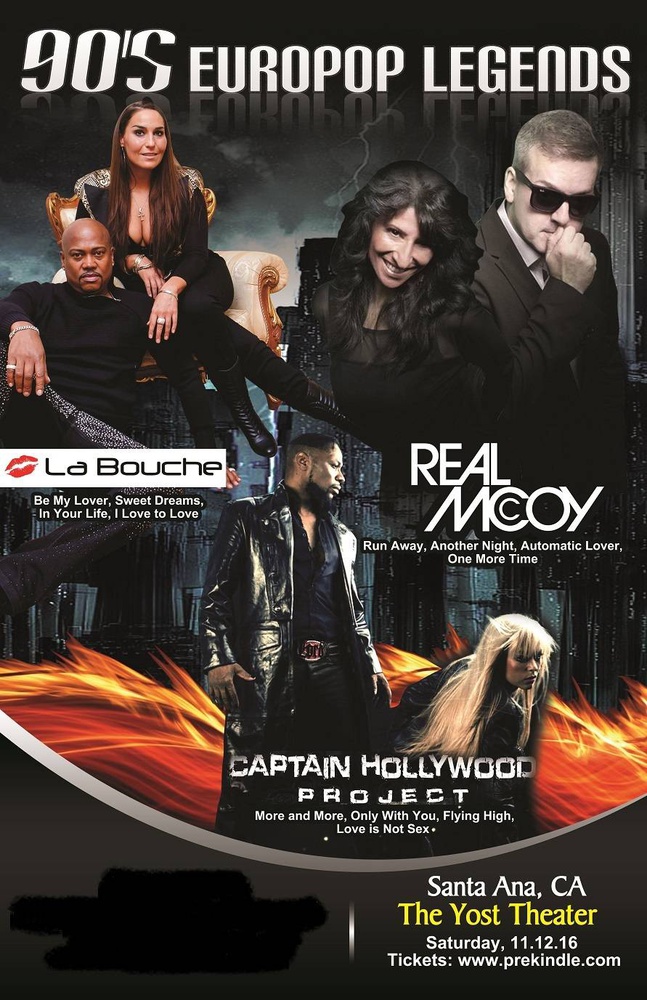 Best known for “ Run Away”, “Another Night”, “Automatic Lover “, “One More Time” and more, Real McCoy will make their debut back to the US for the first time since the 90’s. Another Night had shot to NO. 3 on the Billboard Hot 100 in the late 1994, also reaching No. 1[8][9] on Radio & Records magazine's CHR/Pop Airplay chart. Within three weeks had climbed to No. 2 and also reached No. 1 in Australia. The follow-up, "Automatic Lover", reached No. 52 on the Billboard Hot 100 and No. 58 in the UK.. "Run Away" became the follow-up single to "Automatic Lover" (in North America, it was the second single, following "Another Night"); it got to No. 3 in the U.S.

O-Jay later revealed in 2004 that the groups biggest hits, such as “Another Night” “Run Away” and more, had in fact been performed by Karin Kasar, but was not the face of Real McCoy. ****We announce to you that the astonishing voice behind Real McCoy, Karin Kasar will join us in the US!***

One of the biggest Eurodance groups of the 90’s, La Bouche had a string of worldwide hits. Best known for “Be My Lover” and “Sweat Dreams” . Be My Lover peaked at number one in Germany and Sweden, while also reaching the Top 10 in fourteen European countries. It also peaked at number 27 in 1995 and number 25 in 1996 in the UK Singles Chart when re-issued in that year. "Be my lover" went to number 1 on the U.S. Hot Dance Club Play chart in 1995 and climbed to number 6 on the Hot 100 in early 1996. It went on to win the ASCAP award for the "Most Played Song in America", and sold 6 million copies worldwide. The debut album Sweet Dreams was released on June 12, 1995, which went to number 13 in the U.S., featured two more hit single releases, "Fallin' in Love" (a cover of the 1975 Hamilton, Joe Frank & Reynolds song) and "I Love to Love".

Tony Harrison, a United States Army captain, was nicknamed Captain Hollywood because he danced even when in uniform.--- Harrison released the debut single "More and More", which peaked at No. 1 in Germany and eventually went Platinum. While the single also entered the Top 5 in numerous countries including Austria, Belgium, The Netherlands, Norway, Sweden and Switzerland, it managed to enter the Top 20 in the U.S.Soon after the success of "More and More", Captain Hollywood Project released its debut album entitled Love Is Not Sex, which charted in the Top 10 in Germany and Switzerland. "Only With You" experienced similar success as the first single, entering the Top 5 in Austria, Belgium, Germany, Sweden and Switzerland. "Only With You" was later certified Gold in Germany.