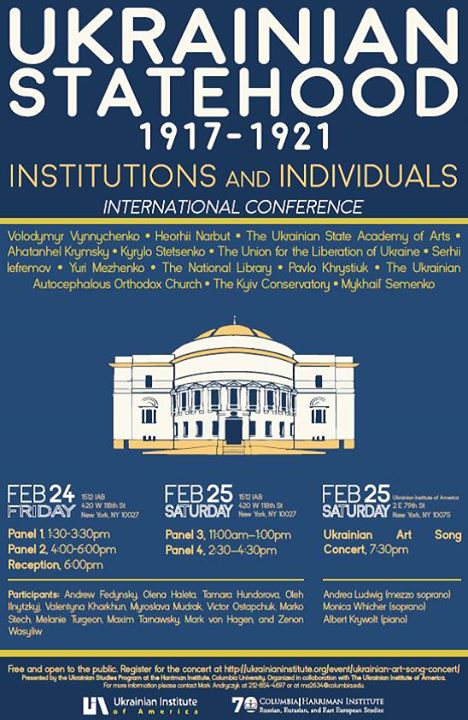 International Conference: Ukrainian Statehood 1917-1921
24
February
1:30 p.m.
16
Columbia | SIPA
420 W 118th St, New York, NY
FIND TICKETS
UKRAINIAN STATEHOOD 1917-1921: INSTITUTIONS AND INDIVIDUALS International Conference February 24 -25, 2017 Columbia University On February 24 and 25th, 2017, the Ukrainian Studies Program at the Harriman Institute of Columbia University in collaboration with the Ukrainian Institute of America​ will be organizing an international conference entitled Ukrainian Statehood 1917–21: Institutions and Individuals that will commemorate the 100-year anniversary of the Ukrainian Revolution and the creation of the modern Ukrainian state. The conference will focus both on the important institutions that were founded under the Ukrainian Central Rada/Ukrainian National Republic, the Ukrainian State of Hetman Pavlo Skoropadsky, the Ukrainian National Republic under the Dyrectoria, and on the individuals that formed them. These state institutions proved to be essential in organizing and giving structure to Ukrainian political, educational, cultural and religious developments at that time. The successes and failures of these initiatives provided models that were both emulated and adjusted in subsequent years and that continue to inform Ukrainian nation-building efforts today. The conference will examine the lasting impact of these individuals and institutions on Ukrainian culture and scholarship. The two-day conference will feature panels focusing on political, academic and religious institutions, literature, visual art and music as well as on memoirs and archives of this period. Among the people and organizations that will be examined at Ukrainian Statehood 1917–21: Institutions and Individuals are: Volodymyr Vynnychenko, Heorhii Narbut, Ahatanhel Krymsky, Kyrylo Stetsenko, Serhii Iefremov, Yuri Mezhenko, , Pavlo Khrystiuk, Mykhail’ Semenko, the Ukrainian Autocephalous Orthodox Church, The Union for the Liberation of Ukraine, the National Library, The Ukrainian State Academy of Arts and the Kyiv Conservatory. A characteristic shared by many of the aforementioned individuals is that they were involved in several fields and institutions at once: the academic, literary and political activities intersect in one variety of individual, while the religious, political and musical in another. Ukrainian Statehood 1917–21: Institutions and Individuals will allow theses particularities to be analyzed from different angles. Another important aspect underlying both institutions and individuals of this period—emigration—will also be touched upon in multiple panels. Participating in Ukrainian Statehood 1917–21: Institutions and Individuals will be scholars from the US, Canada and Ukraine, including: Andrew Fedynsky, Olena Haleta, Tamara Hundorova, Oleh Ilnytzkyj, Valentyna Kharkhun, Myroslava Mudrak, Victor Ostapchuk, Marko Stech, Melanie Turgeon, Maxim Tarnawsky, Mark von Hagen, and Zenon Wasyliw. The first day of Ukrainian Statehood 1917–21: Institutions and Individuals will conclude with a reception while the second day will close with a concert focusing on priest, composer and UNR government minister Kyrylo Stetsenko and the genre of the Ukrainian Art Song, which he developed at that time and which has been recently rehabilitated. The concert will take place at the Ukrainian Institute of America (co-organizer of the conference) and will feature Monica Whicher (soprano), Andrea Ludwig (mezzo soprano) and Albert Krywolt (piano). The entire conference, including the reception and the concert, is free and open to the public. No registration is necessary to attend the conference panels but registration, at the Ukrainian Institute of America website, is necessary to attend the concert. Conference Program: _____________________ Friday, February 24, 2017 Room 1512 – International Affairs Building 420 West 118th St NY, NY 10027 PANEL ONE (1:30-3:30PM) Mark von Hagen “Reading Pavlo Khrystiuk’s ‘Notes and Materials’: Why the Ukrainian Revolution Matters for Historians of the Russian Revolutions” Zenon Wasyliw “Revolution in Faith: The Ukrainian Autocephalous Orthodox Church and its Impact on the Ukrainian Village” Andrew Fedynsky “Working Toward a National Ukrainian Outcome to the Great War: The Union for the Liberation of Ukraine and Other Materials at the Ukrainian Museum-Archives” PANEL TWO (4-6PM) Viktor Ostapchuk “Ahatanhel Krymsky, Orientalist, Ukrainianist, and Permanent Secretary, 1918-1928: The Ukrainian Revolution’s Struggle for an Academy” Maxim Tarnawsky “Serhii Iefremov: Politician, Publisher, Publicist, and Scholar” Olena Haleta “Traditional Building: The National Library as a ‘Revolutionary Project’ by Yuri Mezhenko” Reception (6-8PM) —---------------------------------- Saturday, February 25, 2017 Room 1512 – International Affairs Building 420 West 118th St NY, NY 10027 PANEL THREE (11AM-1PM) Myroslava Mudrak “The Making of a Brand—The Shaping of Identity: The Life and Legacy of Heorhii Narbut” Marko Stech “An ‘Academic Revolution’: The Ukrainian State Academy of Arts and Kyiv Conservatory in the Revolutionary Kyiv of 1917-19” Melanie Turgeon “Broken Harp Strings: The Art Songs of Kyrylo Stetsenko and the Ukrainian Art Song Project” Lunch Break (1-2:30PM) PANEL FOUR (2:30-4:30PM) Tamara Hundorova “Volodymyr Vynnychenko’s Novel ‘Across the Line’ as Psychoanalysis of the Ukrainian Revolution” Valentyna Kharkhun “‘Ukrainian History Should Be Read with Bromine’: Vynnychenko’s Image of the Ukrainian Revolution” Oleh Ilnytzkyj “Revolution, National Culture and the Avant-Garde: Mykhail’ Semenko as Impresario of a New Ukraine” For more information please contact Mark Andryczyk at 212-854-4697 or at ma2634@columbia.edu

Ukrainian Institute of America
Since 1955, the Fletcher-Sinclair mansion at 2 East 79th Street and Fifth Avenue has been home to the Ukrainian Institute of America, a nonprofit organization dedicated to promoting the art, music and literature of Ukraine and the Ukrainian diaspora. The Institute serves both a center for the Ukrainian-American community and as America’s “Window on Ukraine” hosting art exhibits, concerts, film screenings, poetry readings, literary evenings, children’s programs, lectures, symposia and full educational programs, all open to the public. In 1897 the banker, broker and railroad investor Isaac D. Fletcher (1844-1917) commissioned the architect Charles P.H. Gilbert to design a new house. Gilbert designed over 100 large houses in New York City during a career that spanned from the 1880s to the 1920s. As a C.P.H. Gilbert house, the mansion was given a second life as home to the Ukrainian Institute of America. The Fletcher-Sinclair mansion is protected as a contributing element of the Metropolitan Museum Historic District and in 1977 was designated as a National Historic Landmark.
Contact
Events you may like
$20 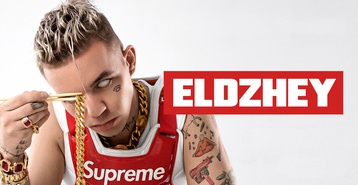