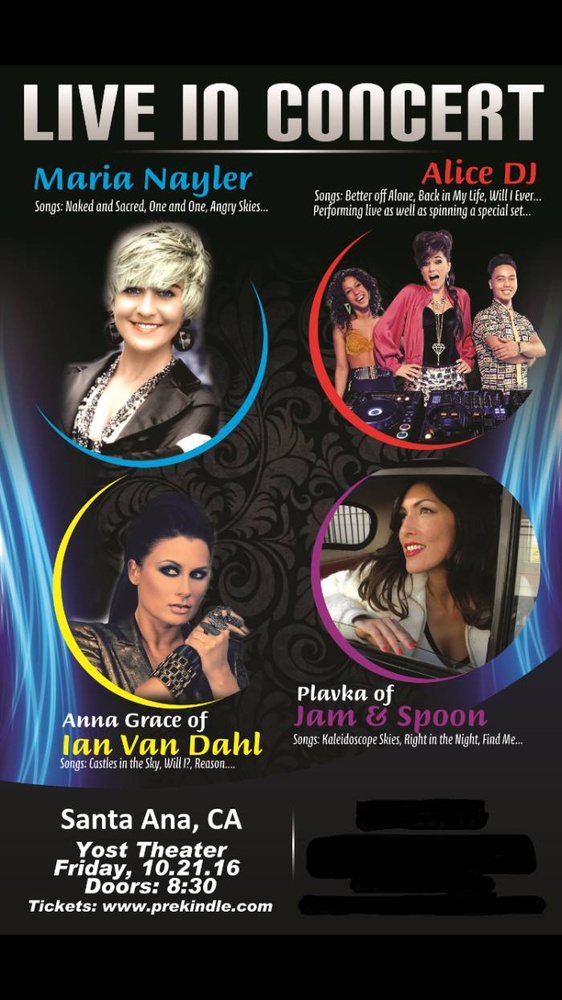 On October 21st we are bringing the classic legends of the eurodance/electronica world to the Yost Theater in Santa Ana: Anna Grace of Ian Van Dahl, I am Alice DJ, Maria Nayler and Plavka of Jam & Spoon will sweep your feet away with their greatest hits!

Anna Grace of Ian Van Dahl achieved international success, charting the UK Singles Chart, peaking on the UK Chart and UK Albums Chart. Ian Van Dahl was best known for Castles in the Sky, Will I?, Reason and much more.

Maria Nayler , best known for "One and One" with Robert Miles who applied her vocals. The song was an international hit topping the charts in Italy, Belgium and peacked #3 in the UK and other countries. Nayler was also known for "Be As One", "Naked and Sacred", "Angry Skies" and more.

Alice Deejay is a Dutch Pop-trance project formed in 1998 by DJ Jurgen. They are best known for their 1998 single "Better Off Alone", which was a worldwide success. They went on a hiatus in 2002, but finally reformed in 2014 under the name Alice DJ with a new vocalist and 2 new dancers.
- "Better off Alone" reached platinum in UK and top 10 in many European countries. It also charted in North America. Followed by their success, "Back in My Life", reached #1 in Norway and top 10 in many others.
- Alice DJ will not only perform their greatest hits for us, the lead vocalist will DJ a special set!!

Plavka's Jam & Spoon had their first single "Right in the Night. This song went top 10 in the UK. Following hits to include "Find Me", "Angel". "Kaleidoscope Skies" was the first single that made the Top 20 in several European countries.